The survey and documentation of Vianden Castle in Luxemburg aimed at realising a complete photorealistic as-built documentation. The resulting 3D-model was to depict the current status precisely and photorealistically textured. The full survey and modelling lasted almost 5 years.
During this time, divided in to several project steps, the different areas were documented with the latest survey technologies (3D-laser scanning, tacheometry, airborne laser scanning, photogrammetry) and transformed into 3D-models. The survey was not only limited to the walls and façades. In addition, almost all interior rooms and the surrounding landscape were completely recorded with suitable technologies.

Set out as a “3D pioneer project” it contained a successively realized complete three-dimensional survey, documentation and modelling of the monument. It served to evaluate the possibilities of combined airborne and terrestrial 3D laser scanning technologies as well as the subsequent photo-realistic documentation with respective computer-based visualisation techniques for large building monuments.

Different stages of the process have been documented with latest survey technologies and transformed into three-dimensional models.
Throughout the project the implementation of different “process chains” and fundamental 3D concepts have been elaborated. These included in addition to 3D modeling different construction phases, reconstructions, 3D animations and stereoscopic visualizations.
Furthermore basic preparatory work was completed for the implementation of the surveying data into 3D model building concepts using CNC milling as well as rapid prototyping technologies.

The project was also sponsored by the EU-supported research project “modern research and presentation of castles”.

The 3D computer-based documentation of the castle is not only basis for research purposes and architectural questions, but also elementary for the visualisations and presentation in a subsequent new museum design.

Currently, six different building phases are reconstructed to supplement the documentation of the current status.

Publication about the Vianden castle (2011)

The results of this long-term work are now available in the recently published 3rd volume “Die Burgen des Luxemburger Landes” by John Zimmer. 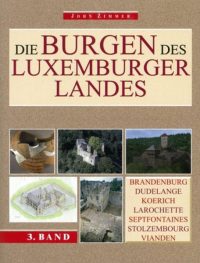