Comprehensive 3D laserscan survey of the moated castle of Oberau. Airborne and terrestrial 3D heritage documentation as a donation for the friends’ association

The moated castle Oberau in the Free State of Saxony is one of the oldest preserved moated castles in Germany and was first described in 1274 as a fortified tower in the state of construction. In the original document still existing today, Margrave Heinrich the Illustrious signed the fief to the Freiberger family Theler, who belonged to the knights, on 26 April 1274, passing over from the Meißner Burgrave Meinher III to the Freiberg family Theler. In its eventful history, the castle had several owners and was extended and rebuilt countless times.

Today, the community of Niederau, supported by the Förderverein (friends’ association ) Wasserschloss Oberau e.V., is concerned with securing the remaining buildings (Wasserschloss Oberau, adjoining farm buildings and park). With great commitment, the Förderverein has already taken the first steps towards rennovating the castle to preserve the historical monument buildings. The aim is to increasingly use the castle grounds for cultural events in the community. To reach the medium-term goal is the full usability of the castle, therefor the work is also supported by the monument authority and many other experts.

When the association approached ArcTron’s new office in Saxony (Meißen) with a request for support as part of the planning for the next renovation measures, Roman Domel, the head of the friends’ association, who was also intensely involved in the association’s work, brought a laser survey of the property into discussion.

In order to promote the further refurbishment measures, ArcTron decided to donate the complete 3D inventory survey carried out with laser scanning technology. ArcTron’s multi-day surveying operation with terrestrial laser scanners (RIEGL VZ400 and Leica BLK360) was also greatly supported by our long-standing partner and world market-leading laser scanner manufacturer RIEGL-Laser Measurement Systems, who supported the project with an experienced surveying engineer and a new VZ-400i scanner with a combined high-quality DSLR camera. Within one day, 217 automatically registered scan positions with a total original volume of more than 4 billion points could be recorded with this high-performance scanner alone. 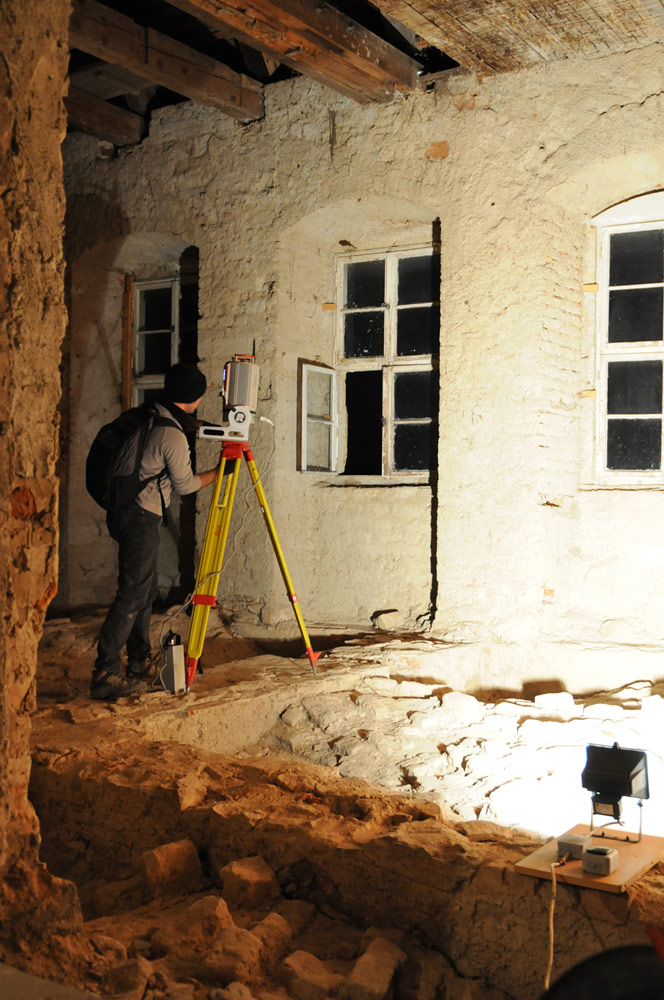 The entire 3D survey of the castle building - including the outer facade, the roof and the interiors from the ground floor to the attic - in just one day.

The terrestrial laser scanners used were supervised by several measurement teams who were able to move independently around and inside the object. The compact design of the Leica scanner allowed measurements to be taken in the smallest of spaces, so that even some extremely nerrow areas could be captured. With the exception of a few inaccessible parts of the roof and some built-up areas, all accessible facades and rooms were surveyed.
The accuracy of the measurements is <10mm.

Due to the high benefit of the data obtained by laser surveying, the municipality of Niederau subsequently commissioned a roof survey of the moated castle. A photogrammetric drone was used for this work, which was carried out in May 2019. This made it possible to record the roof highly accurate and efficient. The high-resolution roof models were then merged with the existing laser scans so that an almost complete 3D data set of the moated castle Oberau is now available. In this concrete case the task was to determine how large the roof surfaces affected by reorganization actually is and how the dormers once placed in the roof were positioned. The findings on the roof beams could easily be reconstructed. The survey data proved to be very helpful also for the historic building research.

With this data set, many renovation steps can now be safely planned and integrated into monument authority specifications for all those involved. 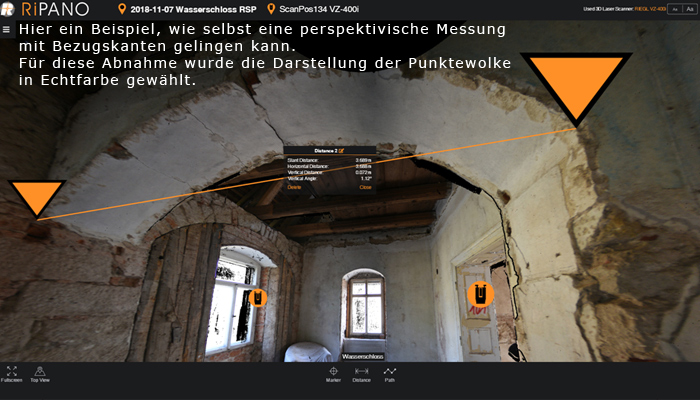 Another particular advantage is that RIEGL’s new software solution RiPANO enables specialists like architects, construction researchers, engineers, planners, etc. to directly use and work with the extremely extensive 3D scan data. With RiPANO, the 3D data can be made publicly available via the Internet. Interchanging data with involved parties for 3D “travelling” and analysis is important. The collected 3D volumes and surface information is used to generate floor plans, sections, orthophotos, etc.

We wish the project and the friends’ association continuing good progress. We are curious to see how our 3D data will be used in the further course of the project.